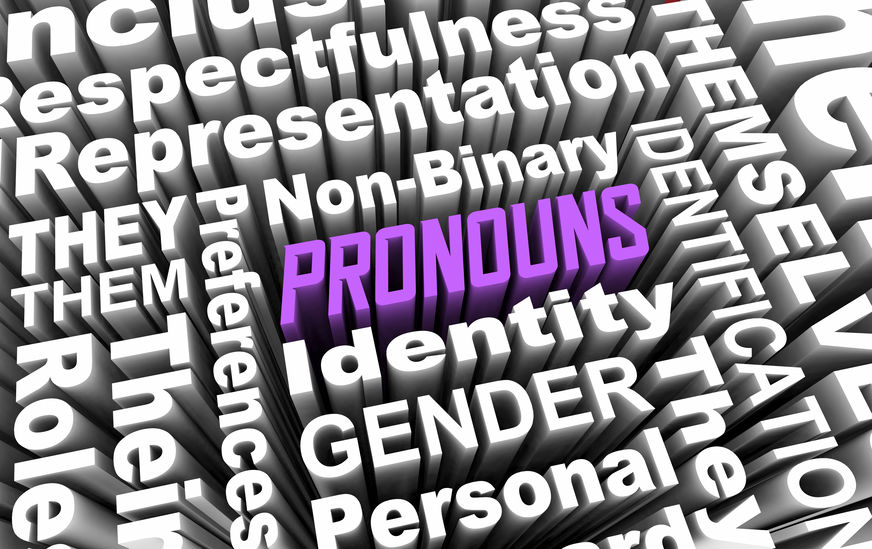 Now, regular readers of my blog know they find all manner of information addressing various copywriting and marketing issues. This post is different. Inspired by a single line in the email signature of a client, I will delve into the depths of gender pronouns and their place in business relationships.

Before I get going, I am female, I identify as female, and I use the pronouns she, her and hers. I am cisgender.

That is something I never thought I would write in a work context, so does that make me a dinosaur?

It’s not as if I live under a rock; I’m well aware of our inclusive environment. It irks when society forces yet another celebrity to reveal their sexual preferences to the world. Who cares? It doesn’t change who they are or their ability to act, dance, sing or appear on reality TV.

Gender identification is a very personal thing. Who am I to criticise someone when I don’t know what it feels like to be them? Just because I was born female and happy being female doesn’t mean the person next to me feels the same way about their gender.

Life’s too short to get hung up on such things. Life and let live. No one has the right to tell someone how they should live their life.

But having said that, I’d never considered sharing my chosen pronouns in a work context. But receiving an email from a new client showing the gender pronouns they prefer under their name in their email signature has made me think again.

Companies today are, quite rightly, adopting a diverse and inclusive culture. That’s not always as easy as it sounds, especially when you bring personal gender pronouns into the mix.

If you’ve never had to worry about which pronoun to use, having to think about using gender pronouns may seem alien. But using the wrong pronoun for someone can feel disrespectful to them. So how can you tackle the issue as a business?

Below are some typical gender pronouns, although others exist:

Male/Masculine: he, him, his, himself

Female/Feminine: she, her, hers, herself

Gender Neutral: they, them, their(s), theirself

Small steps lead to change for the good

For some, this may seem like common sense, for others an unnecessary complication.

But everyone has the right to be treated with respect. Understanding the importance of getting gender pronouns right is a simple step to inclusion and one that every company can take.